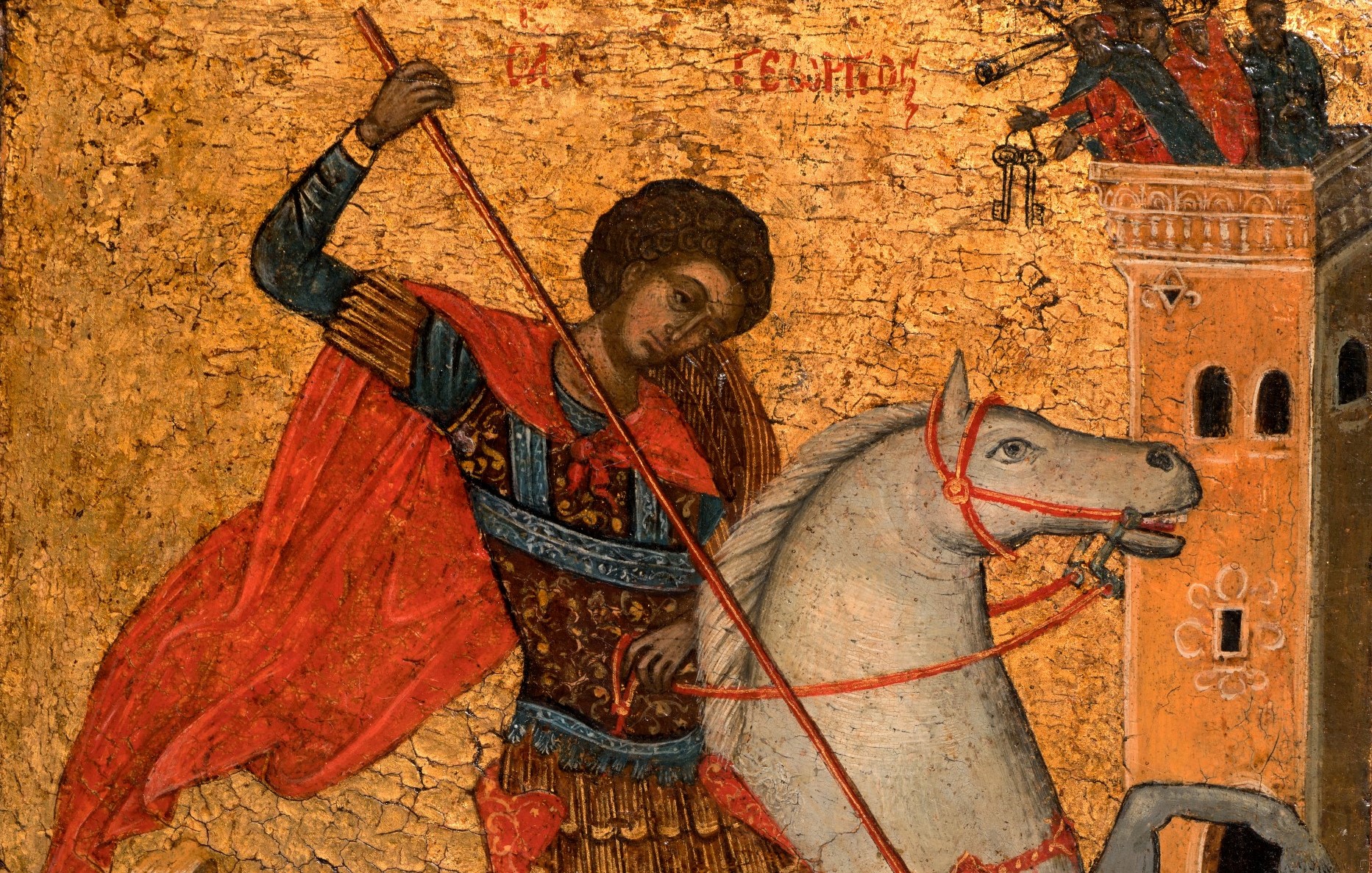 This ancient visual tradition is surveyed through 118 captivating icons, dating from 1350 to 1800. After the fall of Byzantium in 1453, the icon tradition associated with Constantinople, the seat of Eastern Christianity, continued and flourished across the Orthodox world.

The exhibition brings together masters, such as the Cretans, Angelos Akotantos, Andreas Pavias, Nikolaos Tzafouris and Constantine Tzanes, whose holy subjects vibrate with life against shimmering gold leaf backgrounds. Visitors will be invited to discover the great guardian saints who gave hope to ordinary people throughout the ages: Saints Nicholas, George, Elijah, Paraskeva and many more, beloved as healers, warriors, consolers and miracle workers.

Heavenly Beings: Icons reveals the beauty and power of icons, both for general audiences today and for people across centuries throughout the far-flung regions of the Eastern Orthodox community. It explores their dynamic role in the lives of pilgrims, priests and everyday believers of the early modern world. For followers, then and today, such images of holy figures, painted on gilded wooden panels according to age-old methods, serve as ‘windows into heaven’ during the act of prayer.

The most ambitious exhibition of icons to be staged in Australasia, Heavenly Beings: Icons unites exceptional examples from private and public collections across Aotearoa and Australia. In doing so, it lifts the veil on a profound and rich tradition that is alive and well in Tāmaki Makaurau and throughout our vibrant nation.

Adult $24.50
Seniors and Community Card holders $19.50
Student [with Student ID] $19.50
Children 12 and under FREE + a free Gallery Self-Guide activity booklet available online here and at the front desk
(All children 14 and under must be accompanied by an adult)

On the day – You can buy tickets on any day of the exhibition (Friday 15 April – Sunday 18 September) from the Gallery's information desk on our Ground level. Please note that due to limited exhibition capacity, you will be booked into hourly sessions throughout the day. These tickets are available until exhibition capacities are reached. For priority exhibition entry for a particular time and date, please buy your ticket in advance via Eventfinda.

Prices include GST. Booking and delivery fees, where charged, are additional to the admission price. There is no entry charge for children aged 12 or under.

Present your membership card at the information desk on the day of your visit and you will be issued with a ticket to the exhibition.
Members with guest passes may also bring their guests for FREE.

Become a Member on the day of your visit to Heavenly Beings: Icons of the Christian Orthodox World to receive a refund of the price of your exhibition ticket.

Faith and Function: The Power of Icons in Village Societies

Please book at least two weeks in advance of your visit to secure entry to this exhibition. Advance booking is essential to guarantee entry. To make a group booking, please email gallerytours@aucklandartgallery.com.

Please book at least two weeks in advance of your visit to secure entry to this exhibition. Advance booking is essential to guarantee entry and very large groups may need to be admitted into the exhibition in smaller groups. We reserve the right to add extra staff to supervise large groups. To make a group booking, please email education@aucklandartgallery.com

Separate charges may apply for accompanying teachers and adults.

For visiting tamariki, there is a free Self-Guiding resource available online here and at the front desk.

The Beauty of Holiness: Art of the Old Believers in 'Heavenly Beings: Icons of t...

When can I see Heavenly Beings?

Where is the exhibition located?

Heavenly Beings is located on Level 1.

How do I buy tickets?

We're partnering with Eventfinda to offer advance ticket sales for Heavenly Beings. Advance tickets give priority entry for your selected session and are available for sessions starting hourly throughout each day. Please ensure you arrive no later than 20 minutes after your session start time.

You can also buy tickets on the day of your visit from the Gallery's information desk on Ground level. These tickets are available until exhibition capacities are reached. For priority exhibition entry for a particular time and date, please buy your ticket in advance via Eventfinda.

Are there discounts for children?

Yes. Children aged 12 and under are FREE. Please note that children aged under 14 must be accompanied by an adult.

Can I enter more than once with my ticket?

Tickets allow single entry to the exhibition. However, you are welcome to spend as long in the exhibition as you need. If you are purchasing a ticket for our 4pm sessions, please note that the Gallery closes at 5pm daily.

Can I see the exhibition for free?

Yes, if you are a Gallery Member, entry to Heavenly Beings is FREE. Entry is also FREE to any guests you bring with you using your Members Guest pass.

For priority exhibition entry for a particular time and date, please secure your FREE Member / Members Guests tickets in advance via Eventfinda. You may also secure your FREE ticket from our information desk on the day of your visit, exhibition capacity allowing.

How do I become a Member and see the exhibition for free?

What are the ticket terms and conditions of sale?

How far in advance can I buy tickets?

You can buy tickets up to two months in advance of your visit via Eventfinda. Eventfinda tickets are released monthly throughout the exhibition’s season.

When do advance tickets go off sale?

Unless sold out prior, you can buy tickets via Eventfinda up to 12 hours in advance of each session’s start time. Advance tickets give priority entry for your selected session and are available for sessions starting hourly throughout each day.

Where capacity allows, tickets may also be purchased from our information desk on Ground level on the day of your visit.

Why is there a charge for this exhibition?

Your ticket price contributes to the costs involved in mounting an exhibition of this scale and calibre and of bringing international objects on loan to New Zealand.

How much time should I allow to view the exhibition?

We recommend allowing 60 minutes to view Heavenly Beings. The last session time begins at 4pm daily with the Gallery closing at 5pm.

Is there a programme of events associated with Heavenly Beings?

Yes, the exhibition is accompanied by a special visitor programme. See What’s on for more details. You can also subscribe to our fortnightly e-newsletter to receive the latest information on upcoming events straight to your email inbox.

Can I take photographs in the exhibition?

Yes, photography without flash for personal use is permitted. Where there are exclusions, 'no photography' signage will be on display. View the Gallery's full photography policy.

Is Heavenly Beings suitable for families and children?

Yes! We encourage and welcome families with children of all ages to visit Heavenly Beings – look out for special exhibition-related activities and events designed with families in mind. Children aged 12 and under go FREE.

After viewing the exhibition, extend your visit with a trip to Todd Foundation Creative Learning Centre.

Please note we don't allow food or drink in the exhibition and ask that you don't touch the artworks.

Where can I park?

We recommend Auckland Transport's Victoria Street carpark which is located a few hundred metres up the road from the Gallery.

Do groups – including education groups – need to make a booking?

Yes. Bookings for groups (including adult education groups) of 10 or more people should be made by emailing us with the details of your group, group size, and preferred date(s) and time(s) of visit.

Booked groups will be prioritised.

What COVID restrictions or terms and conditions of entry apply?

For the latest information on visiting us during the COVID-19 pandemic please see our COVID-19 webpage. Our conditions of entry are also available online.